A poll of 15 European cities has revealed nearly two thirds of urban residents support a ban on the sale of new petrol and diesel cars by 2030. The online survey of 10,050 respondents was carried out by the British market research business YouGov and commissioned by green campaigners Transport and Environment (T&E).

But as large gaps in infrastructure and prohibitively expensive pricing persist as barriers to mass electric adoption, carmakers are also exploring mobility solutions. For example, Hyundai has announced a new partnership with Uber, offering discounted battery-electric vehicles (BEVs) to its drivers. 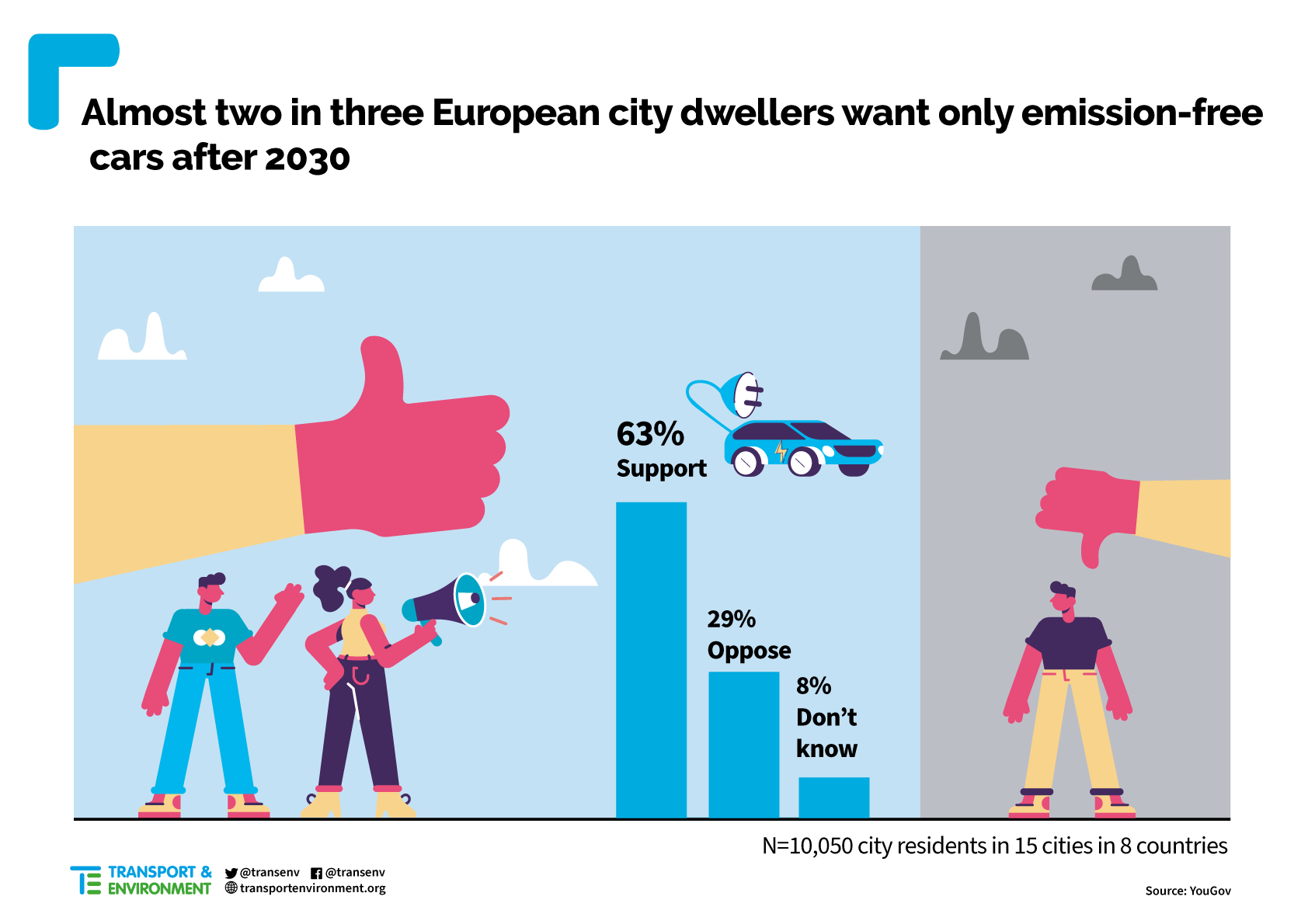 T&E’s poll shows 63% of polled city dwellers support the selling of only emissions-free cars after 2030. All cities saw a majority of respondents backing the move (51% to 77%). Overall, only 29% of respondents opposed the phase-out of petrol and diesel-powered cars.

Unsurprisingly, support is higher among those who suffered from COVID-19. Of those who were infected, or had a person close to them infected, 66% backed the ban. This compared to 56% of those who did not know anyone who was infected or did not recall.

Respondents see price (55%), infrastructure (51%) and range (45%) as the main factors that will drive the sales of electric cars above their fossil-fuel counterparts. Some 10% of respondents think electric sales will not overtake those of petrol and diesels in the future. 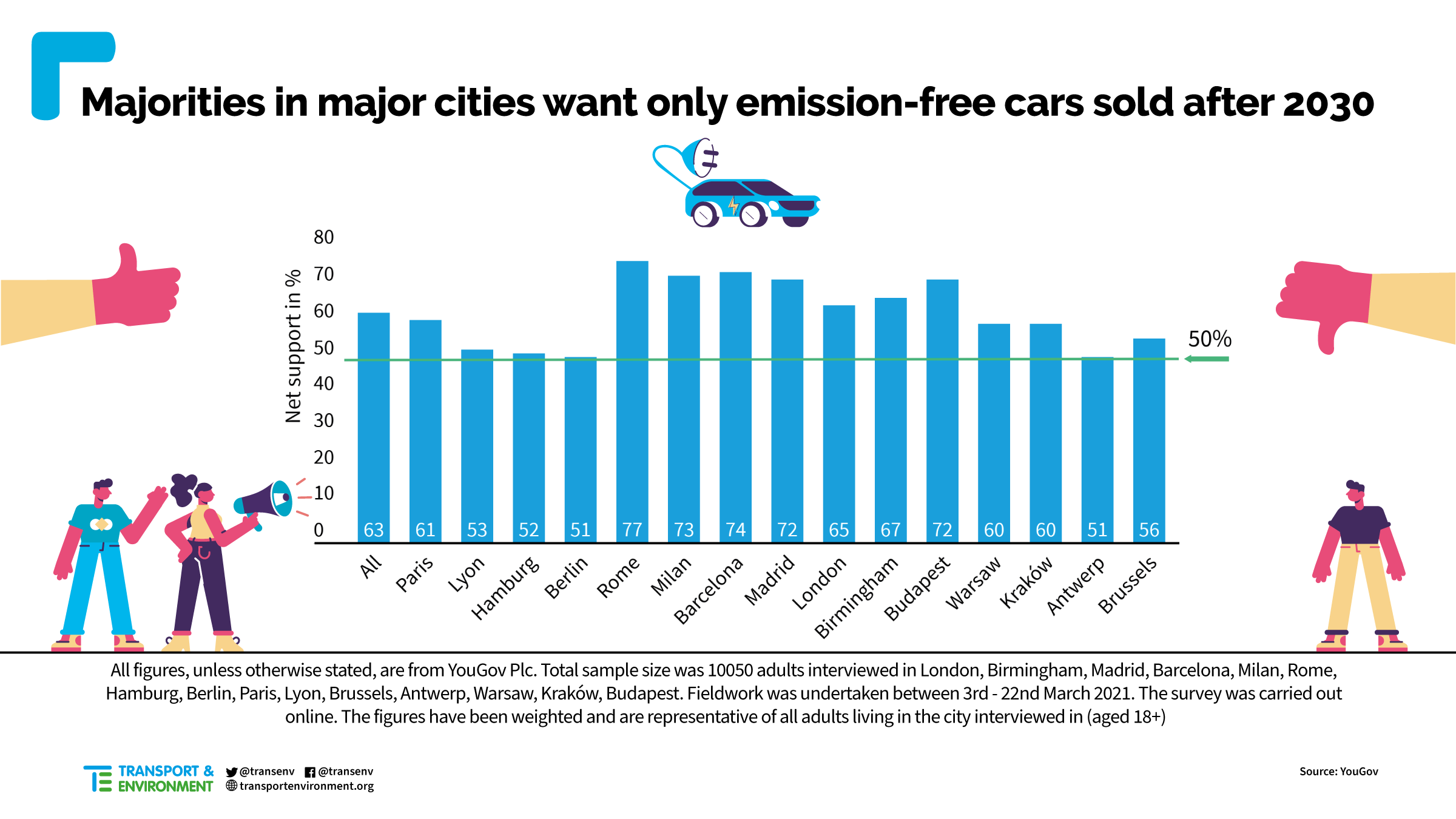 ‘From Barcelona to Kraków, there is broad support for ending sales of fossil-fuel cars in the EU,’ said Julia Poliscanova, senior director for vehicles and e-mobility at T&E. ‘People in cities are the most exposed to toxic levels of air pollution, and they don’t want internal combustion engines to be sold for any longer than is necessary.’

T&E points out the EU Commission could set an end date for the sale of fossil-fuel cars in June when it will propose tightening its CO2 targets. Some European governments have adopted similar plans but without an EU-wide phase-out, questions remain around the legality of these proceedings.

‘Politicians should listen to the people, who say they are ready for the full transition to zero-emission vehicles as soon as 2030. This summer, the European Commission should propose an EU-wide end date for selling cars with internal combustion engines,’ Poliscanova concluded.

While urban residents might appear keen to see a ban on the sale of petrol and diesel-powered cars, barriers do remain for the mass adoption of EVs. In order to increase electric fleet numbers, lower average emissions and increase public exposure, carmakers are turning to mobility solutions like ride-hailing.

Hyundai has teamed up with Uber to offer its partner drivers discounted access to Kona Electric and Ioniq Electric models. The ride-hailing service recently revealed its plans to become a zero-emission mobility platform by 2030. By 2050, Uber plans for half of its aggregated kilometres, across seven European capitals, to be driven by EVs. Amsterdam, Berlin, Brussels, Lisbon, London, Madrid, and Paris will make up 80% of Uber’s European business by the end of this year. Customers will also be able to select the option of riding in a zero-emission vehicle when booking their trip.

‘We are advancing the electrification of our platform across Europe through a new strategic partnership with Hyundai, making it easier and more affordable for drivers to switch to one of Hyundai’s leading electric models,’ said Anabel Diaz, Uber’s regional manager for EMEA.

‘With our responsibilities to drivers, riders and cities in mind, we have made a series of ambitious commitments to support drivers switching to electric vehicles, and this partnership will enable us to continue this momentum,’ she continued. ‘Professional drivers such as those on the Uber app will be the early mass adopters of electric vehicles, which will help to drive the mass market in the years to come.’

However, Uber will obviously not be the only one to benefit from this partnership. By 2025, Hyundai aims to sell over 670,000 zero-emissions vehicles annually and to be among the top three EV manufacturers globally by 2025.

While increasing potential electrified sales via an exclusive discount, Hyundai could also dramatically increase consumer exposure to its latest vehicles, driving confidence and uptake of its EVs. If these cars can live up to a commercial application, running all hours of the day, dealing with different demands, in different locations, the carmaker has a real opening to prove itself.

‘Through this exciting partnership, we will utilise our leadership in electro-mobility to help Uber’s partner drivers make the switch to BEVs and help electrify their customers’ journeys in Europe,’ said Michael Cole, president and CEO of Hyundai Motor Europe. ‘This agreement also gives Hyundai the opportunity to showcase the benefits of our Ioniq Electric and Kona Electric models to an even wider range of people, as well as contribute to decarbonisation efforts in major cities across Europe.’