The media is to blame for the collapse of the diesel market as post-Dieselgate coverage concentrates on health and pollution, putting drivers off investing in the technology.

Petrol now accounts for about 60% of all new passenger car registrations in Europe, while demand for diesel has continued its decline, according to figures released by the European Automobile Manufacturers Association. The latter now has a market share of about 30%, despite dominating in Europe just four years ago.

The latest Autovista Group poll places the blame of this dramatic drop firmly at the door of the media. While some outlets remain impartial, others sensationalise the stories connected with Dieselgate, scaremongering about health concerns and highlighting the increased taxation. Tabloid newspapers even use words such as ‘toxic’, adding to the demonisation. 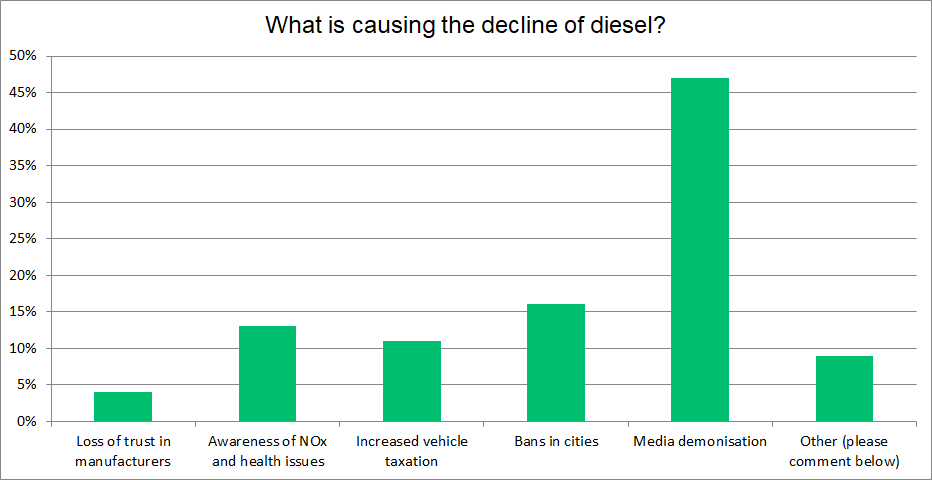 It is for this reason that 47% of respondents felt that the media is solely responsible for the position diesel finds itself in. The frenzy around Dieselgate in 2015 saw increased interest and sparked further stories as others picked up on the momentum. Major magazines also started feeding on the interest surrounding the technology, with some revisiting older engines to measure nitrogen oxide (NOx) levels, despite the fact many of these are no longer on the road, having been scrapped many years ago.

With 16% of the poll, city bans were the next most popular choice. The increased interest in diesel in recent years has raised awareness of air pollution in cities and authorities are attempting to lower these levels by banning older diesel models from their streets.

This puts off buyers considering the fuel, even though modern diesels are cleaner and exempt from bans - Germany for example only considers Euro 5 and below to be a major cause of pollution. Commuters and those who live in large urban areas would have the most to lose from any regulations.

Awareness of NOx and health issues surrounding diesel was next with 13%, despite this being perhaps one of the biggest pushes of the Dieselgate scandal. There was little understanding among the public about nitrogen oxide before 2015 but the topic has since become almost as common as Brexit in the automotive industry.

Modern diesel cars are equipped with technology to reduce NOx output but the slowdown in sales is likely to contribute to NOx increasing as drivers who do want diesel cars look to older models on the used market. This is a way to get around new taxes pushed by governments, which gained 11% of the votes. Pushing prices up is also causing a move to petrol models, which benefit from cheaper duty rates, but this move has seen European CO2 levels rise as a result.

The good news from the poll is that just 4% of respondents felt the reason for diesel sales dropping is a lack of trust in manufacturers. This shows that carmakers are doing their best to regain trust in their brands, and their cars, following the Dieselgate scandal.

The ‘other’ category scored 9%, with a mixture of comments. Many related to ‘government interference’, with one stating ‘government scaremongering with inaccurate information’ as the reason for diesel’s demise. Legislation was also highlighted, with others saying that the ‘green army’ was doing most of the damage. Others suggested diesel cars are dull to drive and one stated that the technology was a ‘con’ to begin with.