With manufacturers starting to develop their electric vehicle programs, Autovista Group wanted to know which carmaker would lead the market in ten years, through its latest survey.

The results of the poll gave us a clear winner, in Volkswagen. The company gained 20% of votes, and with the company currently planning to bring forward electrification of its fleet to meet stricter 2025 and 2030 CO2 targets, this could be a good bet. The company is looking to invest €70 billion in EV technology and wants an electrified version of all models by 2025, or earlier. It is also considering involvement in a German battery consortium and has recently awarded contracts for EV batteries to LG Chem and SK Innovation.

In second place, with 14% of the poll, was Tesla. The US car manufacturer has had a turbulent time recently and has only just met its supply demands for new models. However, the company is seen as a pioneer in EV technology, and the result shows that automotive professionals believe the company has the staying power to continue development and hold a market share while bigger vehicle manufacturers start to launch their programmes.

In third place, garnering 10% of the vote, was Nissan. The company launched its second-generation Leaf model last year and was one of the first mainstream manufacturers to make the electric vehicle popular. With its knowledge of the market, many expect it to continue this program across its other models in the range. However, there has yet to be any other electric vehicle released by the company. 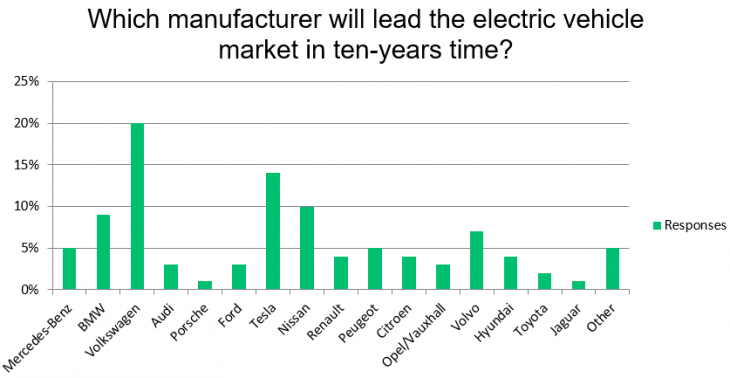 With 9% of the vote, BMW was next. Like Nissan, the company already has a foothold in the EV market through its i3 model and is planning to electrify its entire range in the future.

One company that has announced it will stop selling pure internal combustion engines from 2019, Volvo was next in the poll with 7%. The company spun out its Polestar sub-brand into a standalone EV sports car specialist last year, and the Polestar 1 is expected to go into production soon. The business will develop its first pure electric vehicle in China, with hybrid expected to lead the way from next year. However, Chinese owner Geely has experience in the field with its LEVC brand.

Three options shared 5%, with Mercedes-Benz and Peugeot the carmakers in these selections. The German carmaker recently unveiled its EQC SUV and plans to expand its EQ electric range in the near future. The third option was the ‘other’ category, with Dyson and Chinese manufacturers suggested, alongside Kia, Honda and Mitsubishi in other comments.

Next, with 4%, came Citroen, Hyundai and Renault, a carmaker that already has experience in the EV market with the Zoe. Then, 3% of respondents chose Opel/Vauxhall, a PSA Group company that is planning to offer electrification across its entire model range, starting with its Corsa. Ford also garnered 3%, having recently announced it would appoint a new head of electric vehicles, and amid rumours of the company sharing Volkswagens MEB electric platform. Audi pulled 3% as well.

With 2% came Toyota, a company that has focused more on hybrid technology and was forced into a U-turn on its thoughts about pure electric technology, while 1% covered both Jaguar and Porsche.