In line with Autovista Group’s downside forecast for the year, new car registrations fell by 6.8% in the UK in 2018. The seasonally-adjusted annualised rate (SAAR) of new car registrations weakened again in December suggesting that there are still WLTP-induced supply constraints and also that the uncertainty surrounding Brexit is hurting consumer confidence and in turn new car demand. With the pressure on new car demand and residual values because of the relentless uncertainty surrounding Brexit, how will the UK automotive sector weather this perfect storm?

The only certainty in the UK as far as Brexit is concerned is uncertainty and this has been amplified even further by the UK Parliament’s rejection of the Government’s Brexit deal on Tuesday evening (15 January), albeit followed by a vote of confidence in the UK Government on Wednesday evening (16 January). Nevertheless, Autovista Group has developed a view on the outlook for new car demand and residual values in the UK.

New car registrations were already down by 6.3% year-on-year in the first half of 2018 but were buoyed by buying activity in July and August prior to the implementation of WLTP. Consequently, new car demand recovered to a decline of only 4.2% in the first eight months of 2018. However, the volume of registrations in September was at its lowest level since 2011, and with little over 450,000 new cars registered in the final quarter, this was the worst Q4 since 2012. 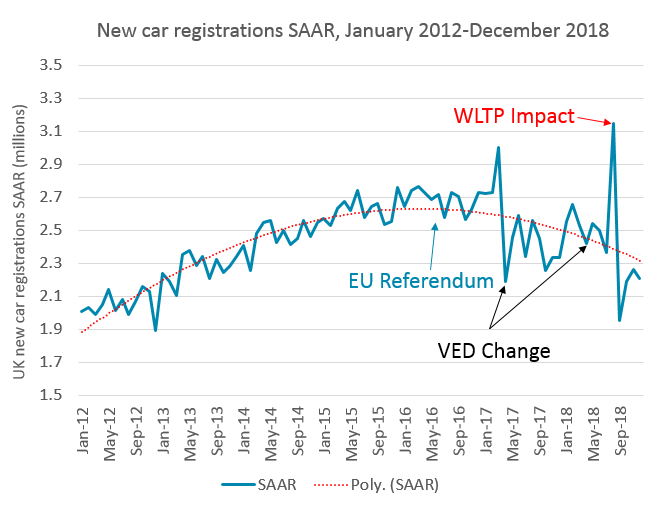 It is not possible to quantify the exact volume of new car registrations that were lost in 2018 because of WLTP and, similarly, the volume that was lost due to an underlying downturn in demand. We estimate that up to 100,000 new car registrations were lost between September and December 2018 because of the combination of these issues. In December alone, for example, more than 18,000 fewer cars were registered than in the Autovista base case forecast. Given this, some volume was added in to our forecast for 2019, but this did not compensate for the reduction to the base case, downside and upside forecasts because of the indication that demand is broadly weakening on the back of rising inflation and weakening consumer confidence. 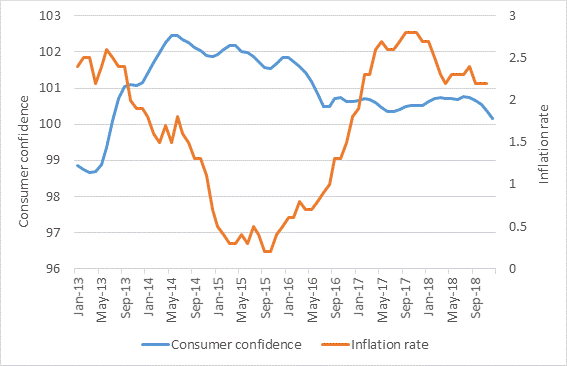 The base case forecast calls for a further contraction of the new car market in 2019, albeit of just 0.6%. However, even this broadly assumes that the UK’s departure from the European Union will maintain free trade in a transitional phase and that interest rates and inflation will not rise and that pound sterling will not devalue further. In an upside scenario, which assumes ongoing free trade through a customs union and stable inflation and interest rates but a strengthening of the UK currency and healthier economic growth too, the new car market could even expand by up to 4%. On the downside, assuming the UK leaves the EU with ‘no deal’ and that WTO trading rules come into effect, consumer confidence and the economy weaken and interest rates and inflation rise, new car registrations could fall by up to 10%. 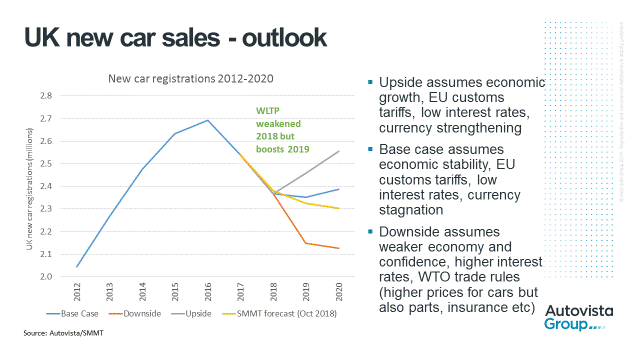 These volume forecasts may sound high given the current state of Brexit flux, but it is worth reiterating that a high volume of registrations were deferred from 2018 to 2019 because of the supply issues following the implementation of WLTP.

Based on the latest used car market data available, Autovista Group estimates that the volume of used car transactions fell by 2% in 2018. Demand for used cars was therefore far more resilient than for new cars. Looking ahead, the performance of the used car market and residual values will be dictated by the new car market as consumers may opt for a used car more than a new car given the current climate. The worse the news for the new car market, the better the expectation for the used car market and in turn residual values. As it currently stands, our residual value outlook calls for stability in residual values in the 12 month/20,000km scenario in 2019. In the 36 month/60,000km scenario, we forecast that values will fall by 1% in 2019, but these assumptions will naturally change if the trend of consumers opting more for used cars than new materialises.

The upshot is that the only certainty for the UK automotive sector continues to be uncertainty, but the used car market and residual values will definitely weather the raging perfect storm better than the new car market.

Following the vote against the Prime Minister’s deal, a host of manufacturers highlighted the need to avoid a ‘no-deal’ scenario.

Jaguar Land Rover (JLR) said it regretted the parliamentary vote ‘We are disappointed with the vote on the Brexit deal and are considering its implications,’ the company said in a statement. ‘We would now urge ruling out a no-deal immediately as the only option with majority support in parliament.’

Ford Chief Financial Officer Bob Shanks, added ‘Ford continues to view a no-deal exit as the least likely outcome given how damaging it will be. Such a situation would be catastrophic for the UK industry and Ford’s operations in the country.’

Vauxhall said it was ‘extremely disappointing’ that the threat of a no-deal Brexit had not been removed. Carlos Tavares, CEO of Vauxhall owner PSA Group, has suggested that a no-deal would raise questions over investment in the company’s Ellesmere Port plant.

Honda is looking to shut down its plant in Swindon for six days following 29 March. ‘We now look to the government to deliver a clear, legally certain path forward to avoiding no deal and to delivering the conditions that support the continued competitiveness and productivity of our sales and manufacturing operations,’ the company said.

Volkswagen also aired its fears over the situation. ‘Any further delay in the Brexit decision-making process poses a risk to investments and jobs in the automotive industry which relies on long-term planning security with development cycles of up to five years,’ it said in a statement.